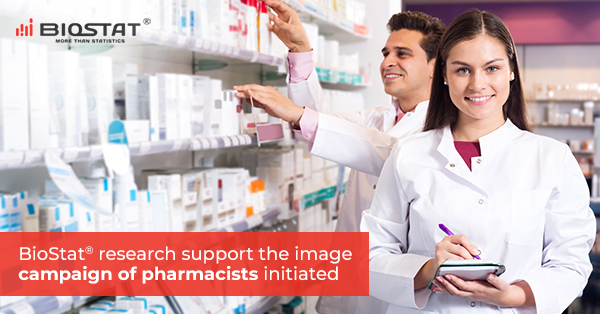 The image campaign „Pharmacist at first” was officially opened on 11 April 2019 in Warsaw by the Supreme Pharmaceutical Council.

The basis for the image-building activities are the results of the research we carried out at the request of the Supreme Pharmaceutical Council (NIA) and the Aflofarm Foundation, which is a co-organizer of the campaign. As emphasized by ElżbietaPiotrowska-Rutkowska (president of the Council): “this is the first such a nationwide campaign promoting pharmacists …”

In January 2019, we examined the relationships between pharmacists and Polish patients and how the profession of a pharmacist is perceived in general. The results of the research were presented in the “Pharmacists in Poland. Polish nationwide image research” report.

The main conclusions from the survey include a high (90%) level of patients’ trust in the pharmacist along with the need to spread the knowledge to the patients that they can and even should rely on the pharmacists’ knowledge of medicines available in the pharmacy. “As part of the campaign, we will tell patients what else a pharmacist can help them besides selling a specific medication”- explained Tomasz Furman, the president of the board of Aflofarm Foundation.

Another goal of the campaign is to promote the idea of introducing pharmaceutical care in Poland.

You can view the “Pharmacists in Poland. Polish nationwide image research” report details at http://popierwszefarmaceuta.pl/